A DELICIOUSLY DANGEROUS CULINARY ADVENTURE FOR A GROUP OF STARVING LEVEL ADVENTURERS.

In Demon Chef Bakto’s dungeon, a fresh party of adventurers is ready to make him a dangerously delicious dish, or die trying. Have you the creativity and skills to please this legendary chef or will you find a way to end his evil cuisine?

EXPLORE Bakto’s kitchen dungeon in search of the best and weirdest ingredients in fiend cuisine;

ENCOUNTER some of the most bizarre creatures in the multiverse as you delve deeper into the dungeon’s mysteries;

COLLECT up to 6 new magic items and 10 powerful ingredients found throughout the adventure;

CREATE a fantastic, original dish to please Bakto or find a way to beat him at his own game.

May i upload a french translation ? Where ? Or do i give it to you ?

I loved the module, I played it yesterday evening in a one shot and we had a really great time!

And now I'd love to translate it in Italian, is it possible? Can you have your permission?

Thank you for writing it :D

I love this concept. The idea of containing a dungeon on a menu is genius. And the magical items are so weird and gross, I love it! Especially liked how each area of the kitchens was it's own little world/faction that interacted with each other and the players in different ways.

Fully recommend this to other DMs

Ran this as a one-shot using Knave for a group of 3, and we all had a blast!

Ran this as a one shot for my group using 5E and it was an absolute blast. The players really got into the cooking part of it and even served up a fallen party member (in pie form) as part of the dish to Bakto.

Thanks for the incredible game.

Reply
The Gates of Truth1 year ago

Beautiful layout for an awesome and elegant design !! Really am wanting to test it !!!

I am looking to publish a free set of artworks for use with this pamphlet hopefully in time for the RPG LATANAM JAM (probably a full picture and a circular token for each creature).  I plan to have it licensed under CC by 4.0. I hope to adhere to the original theme of the dungeon but also add some of my own flavor.

Would you be ok with this?

That would be awesome! Hope the dev gets back to you.

This is too cool

I've run this twice now for two different groups. Once in Troika! and once in D&D 5E. It worked great in both systems. This little module has no business being this excellent. It has excellent atmosphere, a strong theme and clear goal, and excellent play procedures. If you are new to running more OSR-ish adventures, or just want some inspiration on crafting really tight adventures, this is the module for you.

Modified this for my Invisible Sun campaign a couple months ago and it was absolutely wild. Made Bakto into the dungeon itself, represented by a statue, to fit with the surreal fantasy themes of IS but didn't actually have to do much else - the weirdness of the dungeon fit right in. Had a player die in one hit to the Butter Golem like leechlord (IS offers some cool options for the player post-death of the PC so that wasn't /that/ bad.) The players got really into making the cuisine, figuring out how to use the ingredients in creative ways. Was a fun one-off while I was working on picking back up the main campaign after an extended absence. Would play something like this again.

The fact that this is system-neutral is awesome. I'll check if Shadowrun would be viable. I'd love to recreate the chapter 4 (Gluttony's arc) of Widdershins with this... As soon as I gather enough people.

I ran this as a high lethality somewhat slapstick adventure with my main group. We only have three players so I had each player make two alternate characters so in case of party death they could play it like a rogue-like with another set of adventurers.

The first party split up and died nearly instantly (one player got critically hit by the butter golem), but the second run of characters worked together and managed to please Bakto.

A system-neutral, cuisine-themed adventure for your choice of d20 fantasy adventure games.

It's two pages, and there's only one piece of art, but it's a ridiculously strong one, and the adventure follows suite.

Basically, you're press-ganged into playing iron chef for a demon (which you can kill if you figure out its weird and abstract allergy,) and the adventure is about scurrying around the area and gathering ingredients to avoid his wrath. The GM also gets to narrate the whole thing as Bakto, and this adds a wonderful extra layer to the gameplay.

In keeping with the theme, everything is dripping with flavor. The monsters, treasure, ingredients, and encounters are all internally consistent, creative, and fun, and the adventure has a frantic tone to it, but shouldn't actually feel rushed due to the adventure clock being measured in 'the time it takes to fully interact with a room or run down a hall.'

Depending on what system you're using, you may have to fill in some details for monsters / items / spells. Something like AD&D or Into The Odd will probably involve the least work, whereas something like 5e might involve the most---but even then, it's not an onerous amount of labor.

Overall, I'd recommend this to anyone who wants to slot a quirky side-job into their campaign, or who wants to run a super charming, distinctive one-shot.

This is a great addition to a gaming library, and while it might torpedo the tone of a deeply serious game, it should work great in basically anything else.

This is really interesting and I'd love to run it, but is there any more info anywhere on what the players actually do and how the module is supposed to be run? Like, is killing Bakto a good or bad thing? How much do they know about the ingredients, items and layout before they start? Do they know the allergies but not which one is in play at the moment? I realize there's a lot left up to the GM and the party, but what kinds of rails need to be on this thing, if any?

Welp, I'm running it tonight, so wish me luck. I would've liked some guidance, but I'll just yolo it. I'm sure we'll have fun even if it's a trainwreck.

The guidance for the adventure is on the mad lib portion of the pamphlet. It says that players will have 20 turns to gather ingredients and return to the main arena, these are the terms of the challenge. Think of it as a cooking show, If they don't have a dish done by then, death awaits them.

Whether players think killing Bakto is a good or bad thing is up to them, there are rewards in the adventure for simply surviving. About allergies, as it is stated in the pamphlet, "Bakto will not willingly inform players about it". On room 6. one of the NPCs may inform players about his weakness.

Fair question! I ran it last night and we all had a great time. Since it's only two pages, it definitely requires a lot of GM improvising. All of the important stuff is there, but it's up to you to decide how they get to the dungeon, how to present their challenge, and add personalities to a lot of the characters they'll run into...and also how to deal with players doing things not accounted for (for example, my players murdered the insane chef trader, so they only got the item he was showing them when he died).

I also added a a panel of goblin "judges" who tried the food before Bakto, to illustrate the graphic, lethal effects of many of the ingredients (which Bakto of course would be immune to). Conveniently, my group just happened to make the same number of dishes as there were players, so each was judged individually. Instead of just the chicken, I gave prizes for 1st, 2nd, and 3rd place, with 2nd and 3rd being magic items from the dungeon that they didn't come across.

But at the end, they traded in their prizes for the mystery box, which contained...invitations to season two!

Are there more pictures? I purchased the bundle but want more pics to recommend this to friends possibly.

How many player is it for ?

Ideally at least 4, above that is up to the DM. I have seen partys of 8 and 10 members!

What system and player levels was this designed for? I'm planning to run this at a small con and I'm trying to figure the best way to run it. Maybe B/X 3rd level?  Or maybe modify it to run on Tunnel Goons?

This was designed for starting level players in a B/X style game, but people have run it in a variety of systems, like Troika, Into The Odd and 5E. I think it would be a great match with Tunnel Goons too!

Cooking battles have never been this intense. An exciting read and scenario!

This is amazing, I was fortunate enough to take part in this oneshot as a player and the table had a blast! I was impressed by the creativity and the way the “final encounter” was handled. Very inspired by this, hope to see more from you all! 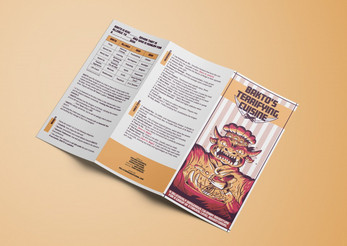 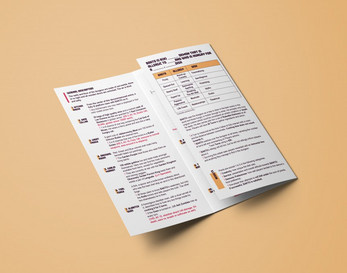